I Am Still Here With You 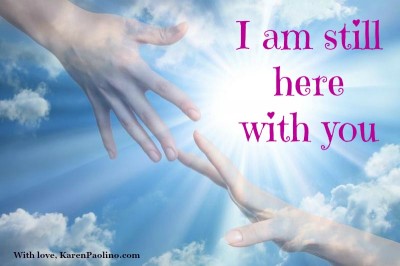 As I held hands going into prayer with a new client, I felt divine guidance flow in and the presence of Archangel Raphael. But then, I felt someone from spirit push through to make her presence known. I was overcome with sadness and I felt like I was going to burst into tears. The spirit coming through kept saying, “Tell her how much I miss her!” Then she repeatedly said, “Birthday” three times, which is always a clue for me to pay attention.

I was confused and I thought this was very odd. From experience, those who have passed are usually not sad like this but at peace. I asked, “Has your mother passed?” sensing it was her. She replied no. I looked back confused and asked, “Who just had a birthday or its coming up?” She tried to think and guessed it was her father’s birthday in April. That still didn’t feel right to me. She started to cry as I continued to share the sadness I felt from this spirit who was present. I asked her, “Why are you crying if you don’t know who this is?” She replied, “I am not sure. I just feel emotional.”

So I let it go and moved on still feeling confused. At the end of the reading, I asked her if she had any other questions. She started to share about her mother, 69 (I think that was the age), who had dementia and it was progressively getting much worse. Sometimes she would be aware and other times she would forget. She was slipping in and out. My response, with a knowing and chills running through my body, OMG!!!!! That was your mother who pushed through at the beginning of your session! That’s why she was so sad! She is expressing how she feels and how much she misses you in her stages of forgetfulness.”

Later, when her friend came in for her reading, which I have known her for many years, I asked if I could share what happened with her mother and she replied, “Absolutely!” and she left the room. As I was sharing, she told me how hard it was for her friend to watch her mother slipping away and just the other day, when it was her Mother’s “BIRTHDAY”, her mother couldn’t remember this special day. She continued to explain how significant this was because in the past, her mother always made a big deal about her birthday. I screamed, “OMG!” and I ran out of the room with no explanation. I had to reconnect with the girl whose mother had pushed her way into her reading. I said to her, “Remember your mother shouted out “Birthday” three times? She wanted you to know on some level, that she did know it was her birthday!!!! She is here with you even in the midst of her forgetfulness.”

Such a gift to her and myself as well. My dad was diagnosed last year with early onset dementia and I am watching as his memory is slipping away. I know they are there, present, in the way they can be. Just like my sister, when she was in a coma before she passed, she could communicate with me, soul to soul, during a time when her body was lifeless. Everyone is a soul who is whole in the human body even when their body or mind is not functioning in its wholeness.

I share this with you in hopes that someone may benefit as I did from the gift of Christine’s reading and her mother’s message. I thank her for allowing me to share this beautiful communication from her mother who loves her so much and who is also grieving the human connection they once had.

and Receive a FREE Creating Prosperity Guided Meditation with Karen